I was born in Oldham Lancashire in 1949 and attended a Secondary Modern School close to where I lived.
Looking back it was a rough time and didn't really inspire me with an interest in 'learning' or any future that was on offer there. Fortunately I was able to escape at the age of 13yrs after qualifying for Oldham Art School where I studied for five years. The emphasis there was on Graphic Art, or 'Advertisement Design' as it was then referred to. 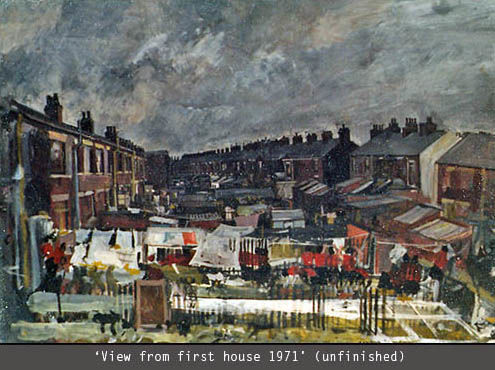 After leaving before the final exam, I worked for a Litho Printers in Oldham for a while before attending Ashton Polytechnic doing Pre-Diploma studies in Art, after which I moved to Sunderland to do Diploma studies at the Art College there.
After qualifying; (Diploma in Art & Design), I did screen printing for a few years before moving to Mossley, a region close to my original roots in Oldham. In my mind the move was a temporary one before taking on the world. I had a wife and two children by that time.

I continued screen printing for a while but then after a period of unemployment I became self employed as an artist painting in water colour and oils. Eventually we had another child and, many years later we are still in Mossley.

Though I can’t say I have chased fame and fortune, nor had the desire to have letters after my name, I have had several exhibitions.

I paint daily, building up work for future exhibitions and doing the occasional commission. I sell photographs through online picture libraries and print photo greeting cards for local shops. Though I hope to carry on painting landscapes I also have different intensions for future work. This is a more risky pastime in financial terms, but one which I was distracted from since I was a teenager. Seeing images of war and starving people on a black and white TV in the sixties awoke in me the realization that the world offered both heaven and hell and showed me that good fortune shouldn’t be taken for granted. My intension was then and still is, to comment on that visually. More recently I have also been commenting poetically; please see 'poems' on main menu. 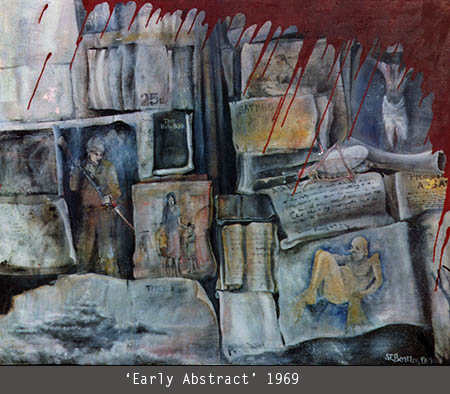 Politics have always seemed to me like a collection of insane actors telling lies. Though I have ignored the subject for most of my life I have realised over the past few years that much of the insanity in the world is caused by the greed and corruption that goes on in political circles under the guise of helping the common people.
Corporate power, wielding monitory force, makes puppets out of both individuals and whole countries. Secrets are kept from the world population and dangerous changes are made without general consent. Cancer cures are known but actively suppressed by the pharmaceutical industry. The wise and those in the know, are ignored due to lies and propaganda from the controlled main media.


In reality the suffering I remembered from the sixties has not changed and negatively influenced governments are still doing what they do best, serving secret agendas and producing the by-product that we all know so well, ‘suffering and death’.

I now find this harder to ignore due to the blatant arrogance and greed which accompanies it. You could say my Artistic conscience has been well and truly pricked.

With this in mind I intend to use some of my time to make social comments that reflect these times in which we live and to support the growing number of others with the same intentions in both Art and other fields.

I have hesitated to make this addition to my intro as this website is primarily a platform for the art I produce and the following is only relevant in terms of ‘imagery’ to ‘some’ of my work. Never the less, I think it important.

Apart from a few minor changes, my previous comments (above) regarding the state of the world, were written a few years ago. Since then I have been looking into several different controversial topics that inhabit the internet.
(I will list some search criteria at the end for those who have an interest in researching the possibility that things may not be quite as they seem. Some of these topics may surprise you, in fact you may wish to reject them completely offhand, but if you care to investigate you may find some of the information worth considering).

I am not going to go into detail about any particular subject, but as an Artist I feel I have a position with some responsibility in that I must allow what I see as ‘truth’; especially that which is suppressed by 'authority', to manifest in my work.
I think this is the job of any creative type, rather than chasing the money and prioritising financial gain in the guise of an ‘Artist’ or a ‘Musician’ etc. before content. As I see it, being a businessman, is for the 'business minded'; those who's aim is to make profit rather than express a relevant message in some way. This situation creates an irony in that the artist has to survive, so commerciality has to be considered to some degree and play its part in survival.

My investigation into the so-called reality of our lives has brought me to the conclusion that we are all in fact manipulated and conditioned, not just to believe a misrepresentation of the world in which we live, but to inadvertently serve ‘unjust hidden controllers’ who, to put it bluntly, simply ‘lie’ and mislead us all.

I can only hope that the ‘open minded',’ will consider the possibility of my statements and investigate for themselves. Beware though, there is an abundance of opposition to deal with. For a while, 'YouTube' was a dominant source for such material but is now infested with misinformation as its controllers saw that freedom of speech was working against their agenda. More recently, it has begun to heavily sensor revelations of truth and remove much information that does not go along with 'world control narrative'.

The real battle is between 'Good' and 'Evil', as it always has been. You must learn to trust your instincts in order to decipher the truth.

Search Criteria-
(All the subjects below can, if you wish, be prefixed with ‘The Truth About’, as with ‘The truth about Cancer’. Please also check out 'Links' on the home page).

The list below could go on and on, but finding we have been lied to regarding just one of the subjects usually leads to investigating another; that is up to you,-